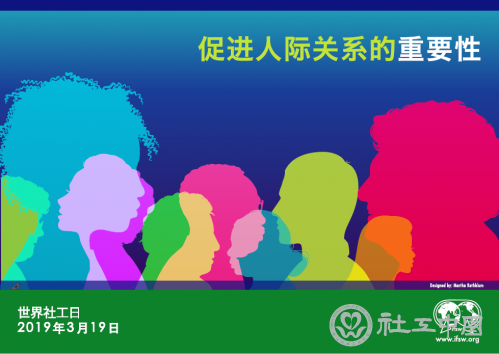 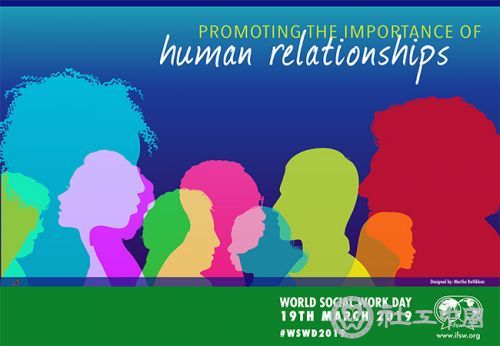 World Social Work Day is on the 19th March 2019. It is the key day in the year that social workers worldwide stand together to celebrate the achievements of the profession and take the theme message into their communities, workplaces and to their governments to raise awareness of the social work contributions and need for further action.

This year’s theme focusses on the social relationships between people’s essential relationships with each other, their environments and their futures. Dr Rory Truell, IFSW Secretary-General said:

‘There was a famous moment in recent history when politician Margaret Thatcher ushered-in the current global period of conservatism and the dismantling of state services when announcing: “there’s no such thing as society, there are individual men and women”. Thatcher’s view continues to have devastating effects as it remains dominant over many aspects of world and national politics. This 2019 World Social Work Day theme directly addresses this false and brutality conservative dogma. From the social work experience all people are bound together by social relationships that determine the quality and security of life. Worldwide the social work profession will unify in promoting the importance of building policies and practices that recognize, cultivate and enrich our interdependent relationships – for peace, the realization of all people’s equal rights and a sustainable world.’

World Social Work Day was launched by The International Federation of Social Workers (IFSW): in

Social Work (IASSW) have joined as partners to the event. WSWD has become a highpoint in the

of the profession to individuals, families, communities and wider society. The day is celebrated on the

messages to their governments, communities, and peer professional groups on the unique and significant

coupled with advocating for social justice and human rights.

2019 - 2020: Promoting the Importance of Human Relationships

Every year IFSW produces a poster announcing WSWD. It is spontaneously translated into over 45

languages, and presented to governments, political bodies posted on the notice boards of social services

and in social work class rooms throughout the world. The event has become so successful in

examples of social work and social development practice. The findings are analyzed and set in the

context of the actual social, political and economic realities, resulting in a publication which is launched

at the biannual World Conference of Social Work and Social Development. (www.ifsw.org/shop)

Council (ECOSOC) (IASSW since 1947 and IFSW since 1959). Jointly the representatives of both

since 2012. Sporadically WSWD at the UN has also been celebrated in Vienna, Nairobi, and Santiago

de Chile. In 2017 for the first time WSWD shall be celebrated at the UN in Bangkok.

Objectives of WSWD at the UN are:

- To strengthen existing or to establish new contacts, cooperation and partnership with UN organisations

and with allied international NGOs.

- To spread knowledge about social work, its values, principles and methods in practice and

- To highlight social work actions, policies and achievements in the pursuit of common goals.

- To disseminate the knowledge about UN activities, goals, program and campaigns among social